There is a rich tradition for those who travel to the magical little city known as Las Vegas, as most people firmly believe in the ‘first-timer’ luck when playing the slot machines. From those little old ladies from Pasadena to the average waitress who struck dumb-luck by chance, which shows that everyone loves to have that chance at winning something big. This is especially so- when some of them happen to offer bigger jackpot payouts likewise. Another attraction to these slots machines often includes more than just a single game within the cabinet itself. One such example that has proved to be quite popular is the Multi-Play Mustang Series of slot machines.

How did Ainsworth bring Australian slots to Vegas? 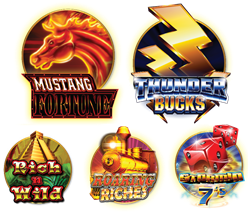 For what seems to be obvious to most, Ainsworth Game Technology is pretty big in America, however only their older fans will remember their humble start all the way from the land down under. The initial company Aristocrat began in 1953, then went on to finally secure their gaming license in Las Vegas in 2000. Les Ainsworth split from Aristocrat due to health reasons a lot earlier than that in 1997, but later decided to form AGT when his health drastically improved.

Ainsworth Game Technology is still a leader in Australian slot machines however they recently opened their corporate offices in Las Vegas just last September in 2016. As most people can quickly spot an Aristocrat slot, it seems that AGT slots are nearly identical if compared side by side- with many of the same bonus games and even sounds being totally unmistakable.

Luckily the internet is a lot bigger than Las Vegas- in terms of offering lots of online slot games. Here at Demo Slot Machines, you’ll find an impressive selection of Ainsworth slots that can all be played for free! If you’re curious as to which ones are our favorite picks, we highly recommend playing Barnyard Bonanza and Diamond Chief online slot games. Then again-online fans also enjoy Jade Emperor: King Strike slot and Trojan Treasure real money play slot game.

These free demo slot games are available to play anytime of the day or night, there’s no limitation when you can play. To satisfy the fans of mobile gaming, all of the free play Ainsworth online slot games work with instant play and no download is needed to try them on any kind of mobile or tablet device.

Just like the real slot machines in Las Vegas, you typically have to put money in them in order to make the reels spin. People these days get pretty comfortable with all these demo play games that don’t cost a thing. You could never do that in a real casino! Well the idea of free credit fun play actually has some relative purpose besides demo play by itself.

You can get valuable experience to learn how the paylines work and betting variations you can apply. Not until you decide to play for real do the winnings actually start to feel just like the experience you would get on the Vegas strip! All you need to get started playing for real is follow any of the reliable partner casino links and register right away.